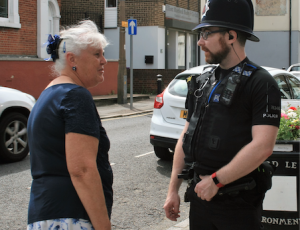 Report by the Stanford-le-Hope Town team

ON Thursday, officers from Thurrock’s Town Centre Team were patrolling Stanford-le-Hope Town Centre when they were alerted of a man acting suspiciously near a business store.

Officers spoke to the male and used appropriate Stop and Search powers. On conducting a check on the police national computer, officers confirmed the male was wanted by City of London Police for failing to appear at City of London Magistrates court since October last year.

He has been successfully arrested and taken to a nearby police station where he will be duly transferred to City of London Magistrates Court in the morning.

“Firstly, without the eagle eyes of our member of the public and their complete dedication to support and jointly work alongside the police, this arrest wouldn’t of been possible.

“This man has been wanted for three months and has shown a complete disregard for the juridical system by failing to appear at his trial.

“Thankfully he did not commit any offences in Essex but this arrest has prevented that possibility.

“Thank you and well done to the member of the public and my officers are so grateful for your support and belief that you have shown that we will act, we will listen and we will be visible.”