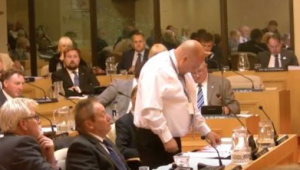 A TILBURY councillor has spoken out and highlighted what has been described as Thurrock Council’s secretive practices against some councillors reports the Thurrock Independent.

Tilbury’s non-aligned independent councillor John Allen has found himself at odds with officers in recent days and believes his role and authority is in danger of being suppressed.

Cllr Allen says he is fuming after being allegedly told the way he deals with residents in his ward is improper and that he should not be contacting them via Facebook, messenger and other social media platforms.

The council wanted to examine his council mobile device but he says he will now return it to the council and get his own.

Cllr Allen says: “Facebook and social media has played a big part of how I fulfil my role as a councillor for Tilbury and its good people.

“However, last week I received an email from council questioning my council phone bill! They have asked me to return my phone asap so the IT Department can check to see why I’m using the amount of data I’m currently using!

“They are saying that 2GB of data per month is enough to fulfil my role and that people should not be contacting me though Facebook, Messenger, or WhatsApp!

“I’ve come to the conclusion to save Thurrock Council money I’m going to submit my council phone back to them on a permanent basis.

“I’m currently waiting for a new SIM card to arrive from Giffgaff so my number will be changing. I will keep the people I serve updated of any changes.

“The council says it operates a digital first policy but wants to stop its members interacting with the public by social media. That is another imposition on democracy and transparency by a council that is getting an ever growing reputation for secrecy and contempt for the borough’s residents.”