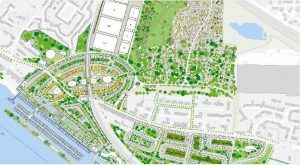 ONE of Thurrock’s most ambitious regeneration schemes is moving forward as the council looks to obtain development rights for a section of land stretching between Caspian Way and London Road.

It represents the first phase of the scheme which will ultimately bring up to 2,850 new homes, a new medical centre, schools, and a film and television studio complex.

Under the plans, this area will be used primarily for housing with the film and television complex being built the other side of the railway line to the east.

The new schools, including primary and secondary, will be built the south of the studios.

Documents show the council already owns around 60 per cent of the land but some has been made available for use by “third parties”.

Next week council leaders will meet to discuss how to take back full control of the land, which could mean paying out compensation.

The amount that will need to be paid out is not clear at this stage.

The documents note: “It is possible to rely on section 203 of the Housing and Planning Act 2016 to carry out development, even if that means that doing so will breach third party rights.

“Those rights can be overridden and the person with the benefit of them will not be able to seek an injunction to stop the development.

“Instead, compensation may become payable to those whose rights are overridden.”

The council is also continuing to look at acquiring the rights to the remaining 40 per cent of the land through private purchases.

In total it is expected to create more than 2,000 new jobs.

The companies behind the scheme which include Urban Catalyst and Swan Housing have now formed Purfleet Centre Regeneration Limited and are in the process of finalising more detailed plans.

The land acquisitions will be discussed at a cabinet meeting next week.