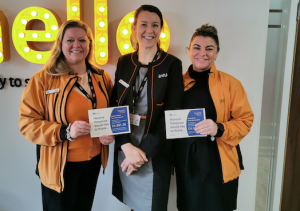 STAFF members at intu Lakeside have donated £4,991 for Little Havens Hospice, after cycling 207 miles from Thundersley to Bruges in Belgium.

Team members Carly North, Sarah Rivett and Nicola Pickford from intu Lakeside’s management joined a team of 21 cyclists, last September to cycle from Little Havens in Thundersley to the Belgium city of Bruges.

Cyclists taking part spent a weekend journeying through the beautiful Essex countryside via Harwich to Holland and down to the delightful medieval Flemish city known as the Venice of the North, known for its chocolate, culture and architecture.

Last year, intu Lakeside announced it had chosen Little Havens as its charity partner for the next 18-months and the shopping centre has held several events and fundraisers for the charity which helps families when they are told that there is no cure for their child’s illness.

The team presented the donation to Havens Hospices’ Challenges Fundraiser, Emma Hamilton, who also organised and took part in the challenge. She said, “We can’t thank everyone at intu Lakeside enough for their continuous support and generosity.

“The ‘Havens to Bruges’ challenge was just one of many fundraising events that the staff at intu Lakeside have organised to raise vital funds for Little Havens and we have loved working in partnership with them. The money that they have raised will help us continue to provide specialist care to babies, children and teenagers living with complex or incurable conditions – the hospice can only exist because of the generous support of community.”

Howard Oldstein centre director at intu Lakeside said, “It is great to see the staff at intu Lakeside support a charity that delivers positive change to the lives of young people and families in Essex. The team raised an exceptional amount through taking part in a spinathon in centre and sponsorship from family, friends and company suppliers. Cycling over 200 miles to Bruges isn’t for the faint hearted and the team did a fantastic job for such a worthwhile cause!”

Havens Hospices are looking for people to take part in the London to Paris Cycle challenge taking place in September 2021. Cycling from London to Paris is one of the great cycle experiences in Europe -with long days in the saddle and some strenuous hill-climbs, the sight of the Eiffel Tower, the finishing point, will evoke a real sense of achievement. For more information about this event, please visit www.havenshospices.org.uk/londontoparis.