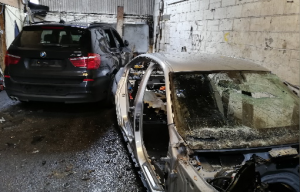 A CHOP shop and stolen vehicles have been discovered in South Ockendon following great work from our Road Crime Team and Rural Engagement Team.

Following information about a stolen vehicle, officers went to an address in Dennises Lane at around 8.50am on Wednesday 18 March.

Inside they found a BMW X3 which had been stolen in Kent and the chassis of another BMW which was in the process of being stripped down.

No-one was found at the site despite a thorough search by the officers involved.

Our investigation into the theft of the vehicles and to bring those responsible to justice is ongoing and we’d urge anyone with any information about any stolen vehicle to contact us on 101 or Crimestoppers anonymously on 0800 555 111.

Chief Inspector Terry Balding, who leads to the Rural Engagement Team, said: “My officers are out and about across the county working hard to keep you safe and catch criminals

“This is just one example of the excellent work which goes on every day as my team work with colleagues from across the force to support victims, protect the vulnerable, be visible in your community, and target those intent on causing you harm.

“They are committed to protecting Essex.”

Matt Hine, Acting Head of Roads Policing, said: “We know that car theft has a really big impact on those affected.

“It can prevent you from going about your daily businesses like going to work or doing your shopping.

“I have officers working hard to identify and trace stolen vehicles so we can re-unite them with their owners.