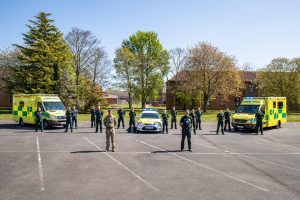 THE CO-RESPONDER team at RAF Marham have taken delivery of two Double Staffed Ambulances at the base to enable them to assist the East of England Ambulance Trust.

RAF Marham’s Co-Responder scheme has been assisting the East of England Ambulance Trust for 19 years and during this time the team has seen considerable change and expansion both in size and with the skills used whilst deployed.

Prior to the team receiving the Double Staffed Ambulances, which they will run alongside their Rapid Response Car, they received intensive additional training in airway management, enhanced clinical equipment such as the Corpuls (ECG monitoring) and driver training. The latest expansion to support this period of national crisis will enable the RAF Marham Co-Responders to attend emergency calls, assess patients and transport them to hospital.

The RAF Marham team consists of around 15 personnel with considerable experience, from a few months to 15 years, supporting the East of England Ambulance Trust on the front line. They have a variety of ‘day’ jobs at the base from Supply Logistics, RAF Regiment and Police, Ground and Air technicians and IT staff.

The longest serving member of the team has seen it morph from a small team, with a small car, that responded to a select range of life-threatening calls and cardiac arrests, to today where they now have the ability to respond to all types of emergency calls.

RAF Marham Station Commander, Group Captain James Beck, said “ I am very proud of what the team have done to support the NHS over the past two decades and this latest expansion with the new training and provision of two ambulances proves how valuable our volunteers are, and continue to be, to our local community”.

“The support they bring to the communities is outstanding as they all promote excellent patient care. The Trust are really proud to have the RAF Co-Responders on board during this challenging time.”