Season ends: a word of thanks as East Thurrock United move into a new era 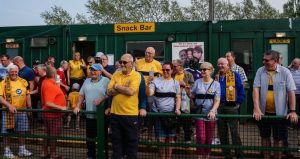 Article below from Rocks Online

HAD circumstances remained normal, today we would have marked our final game of the season with Corinthian-Casuals providing the opposition, but sadly lockdown means we won’t be enjoying what is always such a special day in the Rocks footballing calendar.

This season it would have been a particularly poignant occasion, as we would have had a bumper crowd down to say goodbye and thank you to John Coventry, Christine, Bruce, Linda & Steve, and Mick & Margaret. As said previously, Covo and this group of special people have contributed so much to the club over the years, and they really deserved a brilliant send-off which sadly now can’t happen. The club owes these people a huge vote of thanks, and we wish them all the very best for the future.

The players would also have received the customary, deserved end of season send-off at the end of the game. Football being what it is nowadays, it’s normally the case that some players move on after the end of each season, and we have always hoped that those who do move, leave with at least some fond memories of their time with the Rocks.

So to every player who pulled on a Rocks shirt over the past season we would like to say a big thank-you. It hasn’t been the easiest of seasons for the club, but your commitment to the cause has been brilliant. To players who are moving on to pastures new, we wish you all the very best, and to those that are staying as we enter a new era for the Rocks, we look forward to seeing you when football eventually gets back under way.

We are also be saying goodbye to Covo’s coaching and backroom team of Neil Gray, John Coventry junior and Physio Steve Taylor. Thanks again gents for all your efforts on behalf of the club.

Thanks also to everyone who have played their part over the past season:- Yvonne for manning the snack bar assisted by daughter Emily, and to her husband Neil, who despite stepping aside has still contributed much behind the scenes. To Tony Andrews who spent countless unpaid hours working at the ground, as well as assisting Bruce with the kit at home and away, Michael Edwards and his team of “ball retrieval officers”, plus Dick Newman and those other supporters who helped out with stewarding as required. To Dave Fenn for selling 50/50 tickets, plus his “mile of pennies” fund raiser. (not so sure about his quizzes on the away coach though!), and not forgetting Mikey Cartwright and Jacques Feeney, who have both given time to photograph the action at our matches.

We also want to thank the people who have supported the playing budget through the “Twelfth Man Scheme” (which is still running by the way, details via the “information” “documents” link on the club website), plus Mark Hooper and his group who raised the extra cash to keep Darren Foxley at the club.

A huge vote of thanks to the companies, organisations and individuals who have supported the club through sponsorship and advertising over the past season:-

Thanks also to our loyal supporters for following us through the thick and thin of a tough season, with a special thanks to those of you who regularly travelled away to cheer the lads on.

For the record, the team were standing 11th out of 22 clubs with games in hand over everyone above them when the season came to an abrupt end.

Not for the first time in the Rocks history, the club is now moving into a new era, with new officials, and a new team manager in Paul Martin. We are confident that we have found the right man for the job in Paul, and as one news outlet put it so well, “One Essex footballing Legend is taking over from another”.

There is definitely an air of positive optimism around the club as we re-organise and move forward.

Thanks for your support, we look forward to seeing you when football returns. In the meantime please stay safe.