Firearms officers at disturbance in Aveley

Shortly after midday this afternoon, Monday 27 April, Officers attended an address on Love Lane, Aveley after we received reports of a disturbance.

The road was temporarily closed while officers worked with partners to investigate, after concerns were raised for the welfare of a man in his 30s.

No arrests were made and enquires are ongoing.

The road has now been reopened. 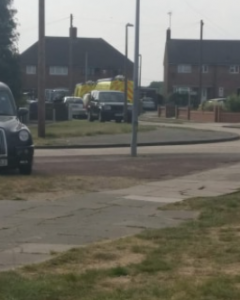 ESSEX Police are currently dealing with a disturbance at an address on Love Lane in Aveley.

A spokesperson said: “We were contacted shortly after midday with concerns for the welfare of a man in his 30s.

Firearms officers are in attendance as a precautionary measure and specially trained officers are attempting to engage with the man, who was inside the property.

“The road has been closed while we continue to work with our partners to ensure the situation comes to a safe conclusion.