THE latest figures from Public Health England (released Friday 8) show that for the sixth day in a row the total number of confirmed coronavirus-related deaths in Thurrock has stayed the same.

Meanwhile, in terms of confirmed cases of the virus in the last 24 hours, just two were confirmed – the total stands at 295.

At Basildon and Thurrock University Hospitals Trust, the number of confirmed coronavirus-related deaths continues to stay on a downward trend, however two patients were sadly confirmed to have died in the latest figures.

This brings the total number of coronavirus-related deaths at the trust to 249.

Below are the statistics for the past month. It is clear there is evidence of a downward trend, at least at this stage. This gives some clear reason to be hopeful while still obviously remaining cautious.

Understandably, many of our readers have asked why, when we report on the number of deaths at Basildon and Thurrock University Hospital Trust, we have not reported on the number of people who have recovered.

That is a very fair question.

ITV’s Robert Peston asked the Department of Heath and Social Care. (DHSC) for an explanation.

Their response is below. 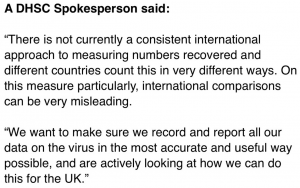 In the UK, a further 626 coronavirus-related deaths were confirmed in the last figures, meaning in total 31,241 people have been confirmed to have died with the virus.

YourThurrock’s thoughts are with all of those affected by the coronavirus.