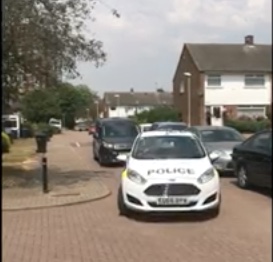 A RECORD number of people were arrested on suspicion of drug driving last month as our officers continued protecting and serving Essex and keeping our roads safe while you stayed at home.

Officers made 266 drug driving arrests in April – the previous highest was 184 last November.
Adam Pipe, Head of Roads Policing, said: “While the vast majority of people in Essex have been doing the right thing and staying at home, my officers have continued to be out across the county keeping the roads safe.

“There are fewer vehicles on the roads and calls to some types of crimes have reduced but officers have continued to work proactively to identify drug drivers.

“This figure also gives an indication as to the scale of drug driving in Essex.
“You could test positive for drugs in your system days after you last had them and with more than 500 officers trained to use drug wipes, you’re really likely to get caught.

“That could mean you could lose your licence, you job, your home and even kill yourself or someone else. Is the high worth the low?”

Mr Pipe added that there appears to be a link between drug driving and other forms of crime.

He said: “We’ve found that 43 percent of those arrested on suspicion of drug driving so far this year – around 300 people – have been arrested before, including in connection with crimes involving violence.

“This indicates there is a link between drug driving and other crime.

“And, sadly, if people are going to commit other forms of crime they are unlikely to consider your safety on the road.

“That’s why the work of my officers is so important – they’re not only keeping the roads safe for you but also disrupting other forms of crime and so keeping your communities safe too.”

Nicola Foster, Chairman of the Safer Essex Roads Partnership (SERP), said: “We know these are unprecedented and challenging times for all but please remember that drug driving is not the answer.

“It is so important for everyone to look after each other and to protect our emergency services from additional pressure at this time.

“Thank you to all of our roads policing officers who remain dedicated to keeping our roads safe.”

During April there were also 86 drink drive arrests and 38 failing to provide a specimen arrests.

If you have any information about a drink or drug driver please call us on 101 or 999 in an emergency.
You can also contact Crimestoppers anonymously on 0800 555 111.