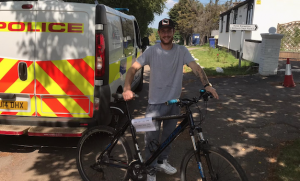 FOLLOWING some kind and quick actions, we found and delivered a bike to a former veteran following a charity’s appeal.

On Monday 18 May, the charity asked for help finding a push bike for former veteran, Jamie, and within 48 hours, Detective Inspector Rob Staples and

We delivered the bike to Jamie this week, who is receiving support from Project Nova – a charity that supports military veterans.

The bike had been donated by one of their former colleagues.

Jamie said: “My life since leaving the Army hasn’t been easy.

“I have made some bad decisions but since I’ve been involved in Project Nova, Lisa, my Support Officer, has been patient, tough and loyal.

“It’s made me realise that there is help there. I now have a roof over my head, I’ve been kindly donated a bicycle and I’ve received some fantastic support.

“I finally feel as though my life is beginning to get back on track. It’s now up to me to push myself and make positive changes.”

Jamie, 34, has been supported by Project Nova for a number of years.

He approached Project Nova in April because he was homeless and sleeping on the streets.

He has now been housed in emergency accommodation in Grays and he is engaging with other agencies.

Inspector Crow said: “Within a few hours, Rob had secured a bike from a friend who had recently lost her husband and wanted his bike to be put to good use.

“Colleagues delivered the bike to Jamie, a very happy veteran.”

Lisa, from Project Nova said, “The donation of bicycle is going to make such a difference to Jamie’s quality of life.

“We’re grateful to every person and organisation who helped in sourcing and delivering the bicycle, especially to Essex Police who were instrumental in this.

“Jamie is absolutely over the moon with all of the support and help he has been given, and feels this is really his time now to turn his life around and eventually get back into the workplace.”