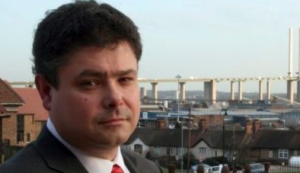 THE LEADER of the Thurrock Labour group has called for an urgent meeting of Thurrock Council over the revelation that the council debt stands at £1.2 billion.

Councillor John Kent, Leader of Thurrock Council Labour Group, commenting on a Financial Times Report which has revealed Thurrock Council debt stands at £1.2 Billion and could rise as high as £2.2 Billion, said:

“Local residents will be shocked that a local council can run up such a level of debt in such a short time without proper oversight by councillors.

“More worrying is the fact that Thurrock Council regularly uses loans from one council to pay its debts to another like municipal pay-day loans.

“This report highlights the unacceptable culture of secrecy, lack of transparency and a contempt for councillors that has grown up in Thurrock over recent years. Even so, surely senior councillors must have given the go ahead for senior officers to run up this level of debt and allow taxpayers money to be used for speculative investments?

“I am seeking the support of the Mayor and other councillors for an urgent meeting of the Council to seek answers to the many questions these shocking revelations have raised”.

The detailed report of the investigation by the Bureau of Investigative Journalism which appeared in the Financial Times can be found here: