TTMS Hit at the Thameside 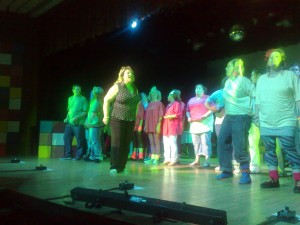 They got my attention in the foyer. An excellent display using images of the cast in their true school days really set the scene for this back in time adventure from TTMS. Ok it’s not Shakespeare and this modern musical will win no prizes for its script.

Think Grease meets High School Musical meets Forbidden Planet but that said it doesn’t really matter here because the emphasis is on the music and the colour and the dance. And the cast provided in spades in those three departments. Director Michael Lambert played Corey Palmer who freezes the on stage action at intervals to explain what’s going on and what’s happening to him 10 years earlier. And his younger self is conveniently played by his real brother Simon who gave a solid interpretation of the role . Perhaps though they could have easily reversed roles as Michael appears and is younger than Simon.

The director must be applauded for giving opportunity to two people who are normally chorus. Sarah White really stepped up to the mark as Laura Wilde and matched the always strong Emma Lambert note for note in their duets. I must mention Mick Messenger here as well. He brimmed with confidence whilst singing Glory of Love and I suspect this won’t be the last time he’s given a singing role.

There was good characterization on display as well. Peter Robinson was believably nerdy; Paul Cameron was wonderfully OTT in the bad boy school bully role of Michael Feldman. We were denied the opportunity to hear Joe Drury sing tonight as his voice deserted him earlier today but we were still treated to another great example of character acting. Youngsters could learn a lot from Joe. It’s not so much what he does when he has lines to say but his subtlety when he’s in the background. I always enjoy watching Clair Davis and have done so since she was thrust from the chorus for Hello Dolly. Melanie Burdett as Cyndi Gibson sang really well and even jumped into a few laps in the audience at one point. Sarah Drury was comfortable in the role of Ms Sheena Brannigan and sang that most difficult of songs Total Eclipse of the Heart. Oh you might think that easy on a drunken karaoke night but tell you what, its not. The chorus scored on most fronts. The dancing was tight the colour was great and usually hesitant one liners were clear.

Claire Penfold led the superb eight strong band who roared through each number with ease . Sadly on several occasions the sound crew left radio mike’s off when they should have been on and vocals were lost from the singers and vice versa so we were treated beautifully to a conversation backstage which we found hilarious. Hopefuly though this problem was ironed out for the remaining performances

All in all a thoroughly enjoyable night out worthy of the standing ovation it received.. My eight year old loved it, you might too?