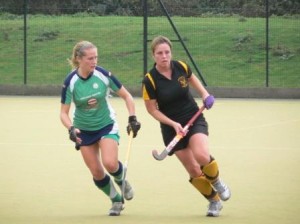 Despite being in a good position to win the match with 20 minutes to go, Thurrock were eventually pleased to gain a point against their local rivals. Tees scored first in the match from a Miriam Nichols penalty corner strike. Chelmsford then equalised against the run of play with a penalty corner of their own. Thurrock continued to attack and were causing the opposition defence problems and from another penalty corner Nichols struck once more. A goal-line clearance from home defender Carol White ensured that the score remained 2-1 at half time. Thurrock then extended their lead early in the second half when after some good work by Jo Taylor and Nicola Pugh enabled Alison Bonner to fire home giving Tees a 3-1 lead. This should have been enough for them to go on and win the game, but Chelmsford hit back through a penalty corner strike and a well taken goal, despite an initial excellent save by Thurrock goal keeper Karen Richardson. Things got even worse for the home side when Chelmsford took the lead from a break away goal. Thurrock showed great determination and continued to push for the equalising goal and they were finally rewarded when Nichols scored her hat-trick from a well worked penalty corner routine, earning her the Player of the Match award.

This Saturday Thurrock travel to Colchester.

Following last week’s defeat after a controversial game, we came back fighting, with a hard won victory over local rivals Havering. It was an evenly contested match settled five minutes from time from a well worked move finished off by Charlene Curtis. A strong defensive performance saw Nikki Woodruff voted player of the match. Our second win of the season saw us climb to eighth in the league.

Next Saturday away to Basildon II

Mens I
Havering II 3 – 9 Thurrock I
Thurrock started this Div 3SE clash the brighter of the two teams with some well worked running off the ball to create some early oppertunities, but just could not convert, but with some good direct play the ball broke for Matthew Gaut to stab the ball under the keeper. Havering then started to get themselves back into the game with a lapse of concentration a misqued pass which fortunately Havering failed to convert. Five minutes later they were awarded a penalty flick which they converted to make it 1 -1. Thurrock then started to control the game and with some great vision Steve Abbott picked out Matthew Gauts who judged his run perfectly for two close-range tap ins. Thurrock then turned defending into attacking with a fantastic run up the pitch by Andre Rudder who slipped in Steve Abbott to smash it in from the edge of the D. The second half was a similar affair with some excellent play but also with some very sloppy play. With some great goalkeeping and defending from Andy Gaut, Tommy Ing and Jorden Salmon Thurrock kept hitting Havering on the break with Matthew Gaut bagging his rfourth. Steve Abbott and Jacob Agoro finishing with great composure scoring in the top corners with Stephen Edwards working hard all the game to open his account with another tap in. The game ended with Jacob Agoro scoring another from a short corner. The final score was 9-3 to Thurrock who have now gone second in the league.
Next week Thurrock play Phoenix at Palmers, 12.30 pushback. Your support is very much welcome and needed.

With 18 players not available Thurrock struggled to field a side for this NE14HOCKEY sponsored division 6 South East game against an East London team who are undefeated. From the start the home side dominated the game and went into the lead after only five minutes. Despite Thurrock working hard they were unable to hold back the strong attacking Londoners and found themselves 5-0 down by half time. The second half was played in a similar vein with Thurrock chasing shadows as the home attackers deftly passed the ball around and obtained a string of short corners to make the final score 9-0. The Man of the match award went to 13-year-old keeper Declan Salmon who despite playing only his third game made some outstanding saves and without whom the score would have been much higher.