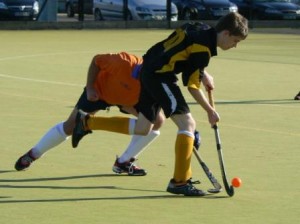 Thurrock have worked hard all season on their fitness and this is when it paid off. T’s started at a very high tempo, barely letting Phoenix touch the ball and the opportunities started to rain in. With some fantastic build up play Thurrock worked several short corners where Jacob Agoro used all of his power and found the back of the net! to open the scoring, 1-0. With some more great play down the right hand side from Nick Stapleton and Steven Abbott releasing Stephen Edwards to single handedly take on the Phoenix’s defence to finish in the bottom corner. Half-time came with the score 2-0.

The second half Phoenix changed tactics to try and get themselves back into the game but by pushing forward allowed Thurrock to hit them on the break. With some great team play and movement Matthew Gaut won two penalties which both Abbott and Agoro failed to convert. The ball was worked down the right hand side with Andre Rudder linking with Nick Stapleton to put captain Steven Abbott in to drive down the line before pulling the ball back for Man of the Match Andrew Sargeant to score his first league goal in 31 years.

Thurrock’s fourth goal was all about quick play with one touch from Matthew Gaut, Andrew Sargeant, Dec Millane and Andre Rudder for Steven Abbott to score from the top of the D. The home side then had to defend, coming under a lot of pressure but Luke, Tommy Ing and Jordon Salmon soaking it up with only one mistake allowing Phoenix a tap in. Thurrock’s final goal came from sub Dec Millane, with the sun in his face, finishing with great composure to make the final score 5-1.

Next week Thurrock face third in the table East London away at 11.30 am.

After their recent string of defeats leaving them firmly in the relegation zone, Thurrock’s 2nd XI might have been excused for letting their heads drop, however this is a group of promising players just beginning to gel, and Maldon & Little Baddow were on the receiving end of the backlash at Palmer’s on Saturday, which coincided with the return of Kevin Appleyard and Ashley Snell.

In this tie last season, Thurrock underestimated the visitors and were made to pay with a heavy defeat, but this time around T’s stamped their authority on the game from the start, with Liam Appleyard and Tom Madden both going close, before Jimmy Venus slammed home the opener. Kevin Appleyard then stopped what would have been an equaliser on the line from a short corner, before Venus added a second to take the score to 2-0 at half time.

The second half saw the introduction of Snell, who wasn’t going to let the young midfield rest on their laurels. Maldon hit back with a goal very much against the run of play, but Thurrock came back stronger and restored the two goal cushion when Liam Birch expertly reverse flicked over the keeper’s outstretched glove.

Jimmy Venus added his third, showing that he can’t be written off in the race for the coveted club top scorer’s trophy, before Snell capped topped off his comeback with Thurrock’s fifth, however it was Gary Venus who was the difference maker on the day, controlling the game from his deep central midfield position, earning himself his second man of the match award of the season.

Maldon did manage to convert a second before the end, this time from a short corner, but the points were never going their way.

The IIs are away to Redbridge & Ilford this weekend.

Due to lack of availability elsewhere in the club, Thurrock were forced to field a very young and inexperienced side for this NE14HOCKEY sponsored Div. 9 SE game. In the early stages however it was they who played the better hockey and after only 10 minutes went into the lead when Michael Fleming latched onto a hit in and slipped the ball inside the post.

Unfortunately the lead was short lived and Waltham Forest equalised within five minutes from a well-struck short corner which deflected in off a defender’s stick. From that point the home side dominated the game and Thurrock were penned into their own half and despite some excellent saves from Declan Salmon, Forest added four more goals to make the score 1-5 by half time.

Waltham Forest continued their pressure in the second half skilfully intercepting Thurrock‘s passes and rendering attackers Michael Fleming and Lawrence Jackson ineffectual. Despite Thurrock giving their all, particularly Man of the Match Matthew Skinner they were unable to prevent Waltham forest adding five more goals to reach double figures and overtake Thurrock in the league.

Colchester Ladies I 1 – 1 Thurrock Ladies I
Thurrock’s first string chalked up their second consecutive draw with a battling encounter against Colchester. Colchester started the strongest but some resolute defending by Sally Ellis, Carol White and debutant Sarah White and some good saves from returning goal keeper Alison Hadley prevented the home side from scoring.

Thurrock then took the lead against the run of play with a fine run and cool finish by Katie Jacks. Unfortunately, the Colchester pressure finally paid off before half time when a penalty corner strike was deflected in through her legs by their attacker. Thurrock played some much better hockey in the second half and despite some promising chances; again falling to Jacks, Tees could not find the goal they needed to win the game. The away side had to withstand some home pressure towards the end of the game, but chances were proving not to be taken at either end and the match ended in a 1-1 draw. Thurrock face a home game at Palmers this Saturday against high flying Holcombe.

The result was disappointing following last week’s win. After a bright start we succumbed to two quick goals. We again took the initiative and pulled one back with a brilliant solo effort from Meera Sud just before half time. The second half saw us have a lot of possession but we failed to get the equaliser we deserved. The match was played in a good spirit and we are looking comfortable at this level.