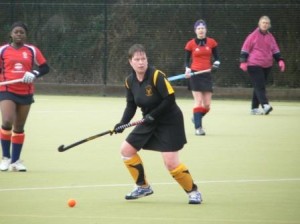 This was Thurrock’s first game back after the christmas break and the recent weather conditions made preparations for this game very difficult but the lack of training didn’t show with Thurrock scoring four goals in the opening 20 minutes of the game.

It only took 25 seconds to start the scoring with Matt Gaut beating the last defender and then the keeper with a well hit strike, then Gaut turned provider to give Andre Rudder a tap in to make it 2-0 and leaving Wapping stunned.

Thurrock continued the pressure and scored the third goal from a Jacob Agoro short corner, then the fourth goal came from Captain Steve Abbott with a hard shot from the top of the D. Wapping started to pass the ball better and did start to cause problems when attacking and got a goal back from a well taken short corner, then got a second goal from a messy goalmouth scramble just before half-time.

In the second half Wapping sensed they could get back into the game and played some good hockey but the Thurrock defence of Tommy Ing, Nick Stapelton and man of the match Jordon Salmon stood firm to stop any attack. Now the Thurrock chances were coming from quick counter attacks and it was from one of these that Matt Gaut hit the ball into the D for Abbott to score from a spectacular slide in on goal to put the ball past the stranded Wapping keeper. Wapping got the last goal just before the end of the game.

Next week Thurrock host top of the league Plashet at Palmers College at 12.30.

As is usual this season the Twos were affected by injuries and non-availability of players and so were not at their strongest. This is a game that Thurrock could have won if they had put their mind to it. After going down 2-0 and working hard to draw level they were hit by three breakaway goals which put the game beyond any doubt. With a few controversial umpiring decisions needlessly affecting their play they were always struggling to play to their usual standard.

Next game this Saturday away to Upminster IV, 11.30 start

When these two teams last met for the first game in NE14HOCKEY Div 9, Thurrock cruised to a 4-0 win, however with a much weaker team of only 10 players, Thurrock faced a strong Colchester side.

The home side attacked from the first whistle and went into the lead after only five minutes when a shot from close range crept over the line. Minutes later a short corner provided a second goal.

Thurrock worked hard with midfield duo Liam Birch and Matthew Skinner providing through balls for lone striker Lawrence Jackson but a tight Colchester defence prevented any success and quickly turned the game around so that, by half time Thurrock were 0-5 behind.

In the second half Thurrock continued to struggle and despite making some excellent saves, keeper Declan Salmon was unable to prevent two more goals from well-struck short corners.

Midway through the second half Thurrock gained hope when, from a hit out, Jackson beat two players before passing to Birch who quickly moved the ball for Man of the Match Skinner to beat the keeper to score. However Thurrock’s hope was short lived and Colchester added an eighth goal five minutes from time.

This Saturday home to Southend IV, 11 am start.

This Saturday home to West Herts I, 2 pm start.

This Saturday away to Old Loughts II