MENS I 5 v 2 ESSEX UNIVERSITY I

The score line slightly flattered Thurrock’s Men’s 1st XI as it was far from the normal slick passing side we are used to seeing. However it was the home side that took advantage of a defensive mistake, with Christian Jenkins on hand to tap the ball into an empty net.

The goal failed to improve the team’s performance and a dubious flick was awarded to the away side which they cooly converted. The score only stayed level for around five minutes after a well worked move culminated in Matt Gaut getting the faintest of touches from a Steve Abbott cross.

With half time approaching Thurrock showed signs of improvement and increased their lead with a well taken Michael Murray goal from a Christian Jenkins cross.

Now on the attack a miss-placed pass lead to the opposition catching most of the home side on the break. A last ditch tackle from Luke Danbrook lead to the award of a short corner leaving the University side just one goal adrift.

In the second half Thurrock controlled the play and looked more defensively sound, any attacks that did get through the defence of Danbrook, Ing and Salmon were dealt with by keeper Andy Gaut.

Christian Jenkins scored his second of the game following a rebound from a short corner. Matt Gaut completed his hat-trick and Man of the Match performance sending a Murray cross into the top corner of the net.
CHELMSFORD IV 1 – 3 THURROCK II

The 2s visited Chelmer Park to take on Chelmsford’s fifth team on Saturday afternoon. Chelmsford had opted to play with 11 outfield players and no goal keeper, but far from being easy for Thurrock to get the ball into the goal, the home side defended doggedly, preventing Tees from getting a clear shot on target.

It was Chelmsford who opened the scoring after 15 minutes, when defender Neil Donovan was left exposed and in a two-on-one situation.
Chris Smith was thrown into attack and made a big difference, but the defence weren’t going to give him any room to get a shot on target. However Smith kept plugging away, and eventually got the equaliser with five minutes left in the first half.

The second half was very frustrating for Thurrock, who in their desperation for a second goal reverted to playing some very ugly hockey. Declan Millane found the back of the net, but the umpires had spotted that the ball had actually gone through a hole in the side netting. Chelmsford came close to regaining the lead on the break, but poor finishing let them down on at least two occasions. Thurrock decided to go all out for short corners, as it was obvious that they couldn’t find another goal in open play, and it was Smith again who used all his experience to win a string of them. Declan Millane lifted the first over the goal, but Gary Ginsburgh showed him how to do it next time, at last giving the Tees the lead. Millane then went on to score the third when Chelmsford were already beaten, but the scoreline flattered Thurrock on a day when they should really have scored a hat-full.

Still, a win is a win, and the 2s, like their first team counterparts, are unbeaten in the league still.

The skipper will demand a better performance next week against University of Essex at Palmer’s.

Thurrock began this game strongly with forwards Jimmy Venus and Michael Fleming putting pressure on the home defence whilst defenders Rick Clubb, Sam Webb and Declan Salmon cut out any potential danger. After 15 minutes a mis-hit Thurrock clearance fell kindly for the Brentwood attacker who rounded keeper Keith Mager for the opening goal. Thurrock worked hard to get back into the game but came up against a strong Brentwood defence. Thurrock went further behind 10 minutes later following a goalmouth melee which led to the ball being nudged over the line as Thurrock’s defence awaited the award of a free hit for an offence by an attacker. In the second half Thurrock modified their formation with Rick Clubb moving into midfield with Tom Tilby and Michael Fleming playing deeper. This had the effect of giving Thurrock the upper hand and they gained a string of short corners making Brentwood work hard to keep the ball out. With five minutes to go the Brentwood centre forward gained his hat trick when he scored from a well-struck short corner.

The ladies fought well in a very evenly fought contest but a lapse of concentration for a five minute period resulted in them being two goals down. Some good midfield play ensured that the ladies always remained a threat and eventually some fine solo work from Katie Jacks led to Meera Sud pouncing on the ball to fire home a consolation goal.

For the third consecutive week the ladies have fielded a different team. This has led to a period of unsettlement and has required the experienced players to lead the way. Sally Willett had a fine controlling game as sweeper and player of the match Ally Bonner worked tirelessly up front. The defecit was kept low when keeper Karen Richardson returning from injury made a great save from a penalty flick.

Next week the ladies are away to Maldon and they go determined to break this losing run.

The Thirds arrived knowing that the game was going to be an uphill struggle as they only had 10 players and to make matters worse the opposition had two substitutes! The ladies placed all the experienced players in defence to initially stem the flow of attack. This tactic worked well and the game settled to be fairly well contested. The strength of Basildon’s attack was ‘squashed’ for long periods of time and joint player of the match Joyce Sackey was unbeatable as she stepped in and made time after time inch perfect tackles. The other joint player of match, Kerry Dent was equally frustrating to Basildon. Dent was proving to be unbeatable as the last line of defence. Towards the end of the first half the ladies were tiring and an unmarked player slipped the ball past Dent. Coach Sharon Judd gave inspiration to the ladies at half-time and this inspired the young forwards and Lauren Marshall went close to equalising. Eventually the tired legs let in a second goal. An exhausting game for the ladies but one to take some pride from. 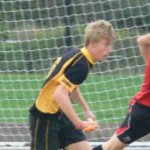 The day started well for Thurrock and Southend U10s with both boys and girls winning against Brentwood. The boys then went on to draw their following two games. However the girls were not so lucky and lost their two remaining games. However, all the children played well and had an enjoyable day.

The children will continue to improve their skills whilst training at Palmers every Thursday night at 7pm.