By Staff Reporter on November 3, 20102 Comments

Corringham’s Tory councillors have explained why they did not attend a vital meeting of their residents from the Frost estate on Monday night.

The meeting saw the 150 residents give the Labour Deputy leader Val Morris-Cook a warm round of applause at East Thurrock football ground as she discussed what would be happening to waste collections on the Frost estate. 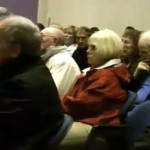 Many residents expressed disappointment that the Conservative councillors did not attend.

Cllr Phil Anderson defended his no show. He said:  “I am very disappointed that Cllr Nicklen and I were not at the meeting this week. The simple fact is, we were not invited or even informed that it was taking place.”

YourThurrock understands that an e-mail was sent by council officers to Cllrs Anderson and Nicklen on Thursday Oct 28th giving full details of the meeting.

One resident, who did not wish to be named said: “E-mail or not. If I was a local councillor and I didn’t see 150 residents walking to a meeting or even hear on the bush telegraph then I would worry that I look a bit out of touch.”

2 Responses to "Corringham councillors defend no show at meeting"