The Essex Savers Credit Union is now open in Grays.

Originally based at 134 Dock Road, Tilbury (open Tuesday and Fridays between 10am and noon), a branch will now be available on Wednesdays (9am to 1pm) at the payments area of Thurrock Council’s Civic Offices inNew Road, Grays.

A pilot opening was held in January and six new members signed up.

Cllr Worrall said: “Credit unions are profit-sharing, non-political, financial co-operatives. They are owned and controlled by members, and exist to help members save and borrow in a fair ethical way.

“In these difficult times the expansion of the credit union will provide an alternative way of saving and borrowing in Thurrock.”

Thurrock Council is working with Essex Savers to encourage the development of more collection points across the borough and hopes to have more branches open in the next few weeks. 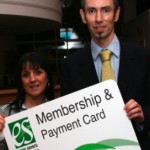 Credit unions work by members’ savings accumulating to form a pot of money from which loans are offered to other members at low rates of interest.

One Response to "The Essex Savers Credit Union is now open in Grays."