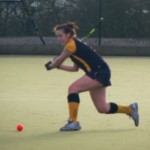 Wapping then started putting a lot of pressure on the Tees’ defence, who worked really hard and tirelessly to keep them out. Two minutes from the end of the game, man of the match Jacob Agoro attacked the defence and lofted the ball high into the Wapping goal area, with Matt Gaut on hand to control the ball before skilfully going past two players and striking the ball past the goalie to put the result beyond doubt at 3-1.
The top four teams all won over the weekend with Thurrock still eight points ahead of second place with only six games to go.
This Saturday the Firsts are home to Chelmsford III at 11 am

Thurrock’s 2nd team steamrollered their way to their seventh consecutive victory in their NE14HOCKEY Div 6SE match on Saturday at Romford. Declan Millane added four goals to the eight he scored in the home fixture against Romford earlier in the season, and Michael Murray scored another five. Also on the score sheet were Ben Knowles who converted a short corner and Tom Madden, who also missed with a penalty flick. The Tee’s defence has been virtually unbeatable this year, and kept their fourth clean sheet in as many matches. Positions stay the same with top of the table with Brentwood IV overcoming Redbridge & Ilford 3-1. Tees are still two points behind the leaders and the meeting between the two at Palmers at the end of the month will be a crucial game.
This week the 2s travel to Saffron Walden with a 12 o’clock start, and will hope to get revenge for the defeat they suffered earlier in the season

Thurrock started this NE14HOCKEY Div 8SE strongly and Michael Fleming was unlucky not to score after only five minutes when his shot from a Matthew Skinner pass went inches wide. Thurrock forced the Loughts keeper into a string of desperate saves as they controlled the game and pressurised the visitors, however the game remained goalless at half time. Thurrock continued their dominance in the second half and eventually got reward when a shot from Liam Birch was saved but Matthew Skinner collected the rebound and slipped the ball inside the post. Loughts made rare forays up the field but strong defending by Sam Webb and Declan Salmon ensured that keeper Richard Heighway was rarely troubled. Midway through the half Gary Venus dribbled through the Loughtonian defence before presenting a measured pass for Fleming to hammer the ball into the net. With Himesh Patel controlling the midfield, Academy were unable to make progress and were forced into defensive mode. With 10 minutes to go, Birch seized on a clearance and left defenders in his wake as he weaved through before striking from the edge of the area. The shot was saved but Dave Everett was first to the rebound off the keeper and claimed his first goal for the club with an unstoppable shot which left the keeper stranded and ensured Thurrock claimed maximum points from the fixture having beaten Academy earlier in the season.

Home to Waltham Forest IV at 12.30 pm on Saturday

The ladies expected a tough match against top of the league Colchester. They certainly were not disappointed! Fast and furious but they kept their cool and some agile goalkeeping from Ally Hadley and some impressive defence play by Emma Grant meant that the team kept in the game which initially looked to be a classic backs against the wall. Colchester took the lead but the Ladies remained resolute in their quest to fight back. The equaliser came from the hardworking and ever dangerous Katie Jacks. The Ladies were confident at half time and captain Tess Eng inspired her team with her constant running, but they were shocked when Colchester took the lead early in the second half. The game was then played at a frantic pace and in the last 10 minutes of the game Ally Bonner went close to equalising after a fine move from the team. The last minute of the game the Ladies proved their worth and with a fine team move it was left to Lou Parrott to smash home the equaliser! The result has rejuvenated the team and made them realise that their bottom of the league position really does not reflect their true ability!

THURROCK II 0 – 3 BASILDON II
Lack of availability decimated the team this week and the ladies should take heart from this performance. The very young and inexperienced team fought back despite being 3-0 down after 20 minutes and regained their composure with Fay Tuffee and Natalie Kerin holding the fort at the back. Leah Purser constantly motivated the youngsters with her continual running.

This Saturday, the Twos are playing Harlow at Palmers, 2 pm

The Ladies were equally decimated by availability issues. Oh what an awful score line for them!Top of the league Redbridge & Ilford broke through the usual calm and experienced T’s defence and they suffered their season’s worst loss. The Ladies spent all of the game defending and their were good performances from the players. Grace Millane and Debbie Lakey made some fine intercepting tackles and Lisa Simmonds spent most of the game skilfully thwarting the devastating attacks down the side. Goalkeeper Kerry Dent was the busiest player and made some outstanding tackles. A game that the ladies are keen to forget but again must take some pride in as not once did the team give up and kept searching for that ever elusive goal!
The Thirds are away to Harlow on Saturday, 11 am start