Charisma Nuqui from Thurrock Lawn Tennis club passed her Nationals at Roehampton with ease. This has been well earned from the hard work she has put in. Her Father Chris Nuqui is very proud of her achievement but states that ”There is a lot of work still to be done”. Thurrock Lawn Tennis are extremely delighted at this news and will support Charisma and her family in every way they can. 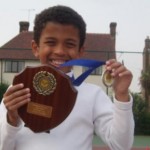 Also happening at Thurrock was the Mini tennis competitions organised by Terry Morgan Thurrock LTC Captain. There were some very good matches with the Mini Red taking place on Monday 18th April with Lenny Kitoko taking the spoils (picture), after some fine battling from the runner-up Cian King-Liffen, Lenny eventually won 10-7 with some good rallies between both players. Well done to both players for an extremely good final enjoyed by all.

Richard Tucker came Third after a play-off with Sean Fashesin-Souza winning by 10-8 again some very good rallies and everybody who watched really were pleased with the standard of play.

The Yellow ball took place on Thurs 21st April 2011 with up and coming tennis star Olugbemiga Adenaike winning against Rhys Neavesin best of three short sets by 2 sets to 1 the scores were 4-2, 1-4, 4-1 some fantastic tennis was played and Rhys certainly will be the one for future tournaments at Thurrock LTC.

Oluwayomi Adenaike was defeated in the 3rd place pay-off by William Pearn 4-2, this was his first tournament and should be pleased to get this far against some very good players in the competition

Terry Morgan would like to thank Armand Kitoko for volunteering during the matches at the Mini Red and also would like to Thank everyone who turned up to play and watched some fine tennis.

We will be running some more compeitions in the near future and to be eligible to play you must be a member of Thurrock LTC and also have a British Tennis Membership Number.

Please see www.thurrockltc.co.uk for more details on future competitions and membership within the club.