Film competition students have a Cannes do attitude 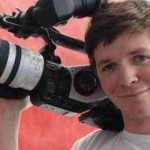 A GROUP of BTEC National Diploma Media (Moving Image) students from South Essex College have entered a short film into a competition at the prestigious Cannes Film Festival that takes place next month.

The strict rules of the competition, called Straight 8, meant that the three minute 20 second film had to be filmed on a super 8 cine film camera with no editing or post production, so was all filmed in-camera.

The three students behind the project were Chelsea Dean, 19, from Chelmsford, Alex Morris, 18, from Orsett and Hannah Snelling, 18, also from Chelmsford.

Their brief also stated that the title of the film had to be ‘All or Nothing’ and their concept certainly delivered!

Chelsea, who also acts in the mini masterpiece, said: “We wrote a script about a poker game where the characters get killed off as they go along. It’s like Russian Roulette, so it’s literally all or nothing.”

Hannah added: “It took one day to film in The Alex pub in Southend and we had to do it all in one take. In all it took around four weeks to script and plan. The concept is there is post production so you can’t cover your mistakes with any fancy editing. It’s one take, you stop and then you do the next take. Then it’s sent off and they develop it for you.”

The students may have an anxious wait to see if their work comes up trumps at Cannes which takes place this year from 11th – 22nd May, but they can already pride themselves as being competition winners as they had to beat out several other College groups before they could even yell ‘Action!’ The prize meant that the students were able to produce their short, remaking it on film having originally submitted it on video, and the College also paid the students entry fee.

Of getting this far, Hannah said: “We were shocked we won because it was so stressful. We all watched everyone else’s and the standard was so high we weren’t expecting anything. A lot of hard work went into putting it together so we weren’t even thinking about the competition at the end of it, but we were really pleased with how it turned out.”

Although the students won’t be able to attend Cannes and rub shoulders with the likes of George Clooney and Quentin Tarantino they are really excited about what doors this competition may open.

Alex concluded: “It’s a great opportunity and if it wasn’t for the College and I don’t think we would have even thought about entering. Our tutors have been really supportive and really boosted our confidence. They’ve made us realise our work is good enough to be submitted to such a high profile competitions.”

Whatever the outcome the budding filmmakers agree that their experience will stand them in good stead at University. Chelsea has a particular interest in editing and CGI so is planning to study Digital Film and Screen Arts at Farnham and Hannah is hoping to pursue her love of film by studying Cinematography on Set at either Greenwich or Kingston.