After a successful 2010/11 season the St.Clere’s Saturday Men’s teams were looking forward to the challenge of playing football higher up the league structure for the season just gone. Despite the jump in class they continued to hold their own and are looking to build on this to make the forthcoming season another successful one.

To celebrate this season’s achievements all three teams got together at the Foxhounds in Orsett and held an excellent presentation evening.

The Reserve team , managed by Horraine Goffe who we wish all the best for the future on his departure, found it a little tougher finishing seventh. Despite this awards were handed to Jack Tremaine who scooped 3 awards, Stuart Knowles, 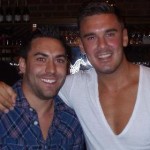 Thank to the Foxhounds for their superb hospitality and to the teams sponsors whose contributions this season have been invaluable.