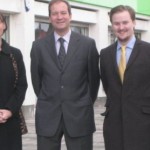 THE three ward councillors in the Homesteads took the chief executive of Thurrock Council on a tour of the ward to highlight to him the issues closest to the residents hearts.

Councillor Macpherson said “I appreciate the chief executives time. We discussed matters that were close to residents hearts with the hope that we can make The Homesteads a great place to live.

Cllr Tolson added “We have been working hard in the ward and it was nice to be able to show Graham some of these achievements, but also to highlight our concerns”