Man wanted after knifepoint robbery on woman in Grays 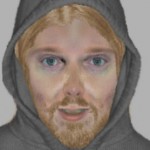 investigating the robbery of a woman in Grays have released an efit image in the hope of identifying the man responsible.

A woman was approached by a man while in a car park in Darnley Road, underneath a bridge at 2.45pm on April 25.

He pushed her against a car and threatened her with a knife demanding money.

The woman handed over all the money she had, a two figure sum, and the man fled the scene.

The suspect, depicted in the efit, is described as white, with shoulder length blond hair. He wore a dark grey hooded jumper with the hood up, dark blue jeans, a black glove on his right hand and a white carrier bag in his left. He has stubble on his face which was almost a full bead, yellow teeth and dark circles under his eyes.

Anyone with information is asked to contact police at Grays on 101.