Man wanted over series of assaults

DETECTIVES have appealed for information to find a man wanted in connection with a series of assaults in south Essex.

They want to trace James Gray, 22, from Tilbury who has failed to answer police bail, failed to appear in court and is also wanted for a serious assault.

Gray, whose last known address was in Tilbury, is 5ft 9in tall, of stocky build and has short brown straight hair.

He was arrested on suspicion of causing grievous bodily harm after a security guard was assaulted at Chicago’s nightspot at Festival Leisure Park, Basildon on Christmas Eve last year. He later failed to answer bail.

Gray is also wanted after failing to appear at Basildon Magistrates’ Court on March 15 this year after being charged with grievous bodily harm at Stanford Le Hope on January 8, 2011.

He is further wanted in connection with an assault at East Tilbury on June 17 2012 in which a woman was kicked and punched in the head and face. 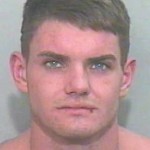 Anyone who can help with enquiries should contact Dc Chris Martin at Grays Serious Crime Team on 101 or call Crimestoppers anonymously on 0800 555111.

One Response to "Man wanted over series of assaults"