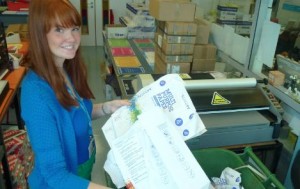 Essex College has been announced as a finalist in the national Green Gown Awards 2013, which recognises the exceptional sustainability initiatives being undertaken by universities and colleges across the UK.

The College, which has campuses in Basildon, Southend and Thurrock, has been shortlisted alongside Basingstoke College of Technology, Falmouth Exeter Plus, Harrow College, Manchester Adult Education Service and the Royal Veterinary College.

The College has pooled all of its sustainability efforts together and formed a dedicated cross College group of academic and business support staff that is charged with promoting green awareness policies that help save time, the environment and money.

Louise Murphy, Procurement Officer for the College, said: “It’s not just about recycling cardboard and drinks bottles, it’s more far-reaching than that. One of the things we are trying to do is boost the local economies and drive innovation by using nearby suppliers where possible; this helps to limit the mileage our purchases have to travel, reducing environmental impact and increasing local spend on goods and services”.

With sustainability moving up the agenda, the Awards, now in their 9th year, have become established as the most prestigious recognition of best practice within the tertiary education sector. This year 81 motivational and inspiring sustainability projects representing 53 educational institutions across the UK have been shortlisted with 216 applications entering the Awards, the highest number ever to do so.

It’s not something staff have just got involved in at South Essex College though, it is also something that students have very much taken an active part in as well, as Claire Gavaghan, Head of Mathematics, Science & ICT, explained. She said: “To better inform students of their responsibilities as sustainably responsible citizens, we ensure the Ascentis Environmental Sustainability Award is taken by all new FE students. In the last three academic years 8,126 students have completed this qualification and more will be benefitting from it when they return for the new term.”

Speaking about the Awards as a whole, Iain Patton, Chief Executive of the Environmental Association for Universities and Colleges, the company that run the Awards, commented: “In the face of tumultuous change, sustainability is revealing its value to the education sector. With Green Gown Award application numbers even higher than last year these sector leaders are finding new ways to build financially viable and resilient organisations which prepare employable graduates who are ready for the challenges ahead.”