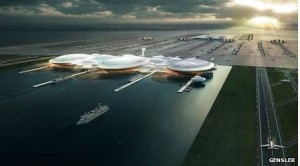 DESIGNS and details of how a Thames estuary airport would work have been unveiled.

The consortium behind the scheme claims it could be built within seven years reports the BBC.

The Davies airport commission is currently reviewing potential sites for more airport capacity in the South East, including additional runways at Gatwick and Heathrow.

Testrad said opportunities for housing, employment and the economy were huge but Heathrow would probably have to close

“Most importantly it avoids flying over densely populated areas of London and the South East, removing completely the noise contours and impact which have bedevilled millions of people throughout and around London over the past 40 years,” she said.

Speaking on Tuesday morning Cllr John Kent said: “In time we will analyse these latest plans in detail and I am 100 per cent confident we will be able to provide common sense arguments against them all.

“But just looking at what’s been published shows that these developers have no concept of the chaos they will cause and have put absolutely no feelings whatsoever for the people of south Essex and north Kent in general and Thurrock in particular.

“They claim their proposal will prevent the ‘demolition of houses, removal of green field sites, bird strikes, acquisition of private land and demolition of industrial infrastructure’.

“I ask how? If the airport was to be built it will need roads and railways between it and London – I struggle to see how that can be done without demolishing homes and it would certainly mean driving motorways through the green belt.

“I simply cannot understand how it will eliminate bird strikes in an estuary that is chock full of waterfowl – unless water birds don’t count.”

Cllr Kent added: “They say the estuary airport will take flights away from ‘densely populated areas of London and the South East’ but it will mean all Thurrock residents and everyone living within ten miles of the Thames estuary will have to put up with the noise, the pollution and the horrific congestion an airport would bring.

“Finally they claim this £42 billion scheme can be built in seven years! Forget HS2, we’ve had experience of the Channel Tunnel rail link – that took decades – and currently the government is sitting on a £2 billion decision about a Thames crossing that we know, even if they can make a decision today, won’t happen for ten years.

“As I said, we’ll look very closely at the proposals, then we’ll talk with our neighbours, and then we’ll make sure those plans are put exactly where they deserve to be. In the recycling bin.”