Firefighters tackled a fire involving a trailer. Initial emergency calls to the service reported a house fire but on arrival crews confirmed the fire involved a trailer rather than a house.

YT understands that the fire is under control and that fire service are standing down.

THERE are reports of a large fire in Tilbury.

YT understands that it is in the Melba Gardens area of Tilbury.

Sources have told us that there are three fire engines, two police cars and an ambulance at the scene. 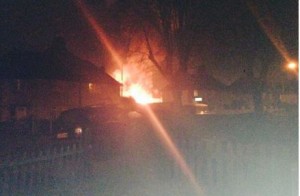