THURROCK MP, Jackie Doyle-Price has joined in on the war of words over the state of horses in the Mardyke Valley.

Animal welfare campaigners were concerned that the animals were being exposed to ill-health as they were standing in water, a situation, exacerbated by the recent heavy rain.

The council position was that they had been reassured by the landowner that the horses had been moved to dry land. The council acknowledged that the land needs to be “more intensively managed.”

Chief Exective, Graham Farrant entered the fray and told campaigners that he “Visited on December 31st and there were no horses visible on the site from the Ship Lane end. I know that Ian also visited earlier and saw three horses on dry land at the top end of our land, but no others.

“Driving past the site yesterday (Jan 2nd) I did not see any horses on our land”.

Mr Farrant’s e-mail did not go down well with the campaigners who sent a long list of sightings of horses. 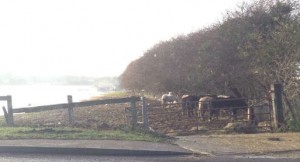 Now, Thurrock MP, Jackie Doyle-Price has also slammed the council and accused them of doing nothing.

In a letter to Thurrock Council, Ms Doyle-Price said: “Whilst you are quite right that the welfare of animals is the responsibility of the owner, anyone who turns a blind eye to suffering is complicit in the offence. This is why so many reports are being made about the welfare of these horses to so many agencies by well intentioned members of the public.

“And whilst it is true that as a local authority the powers in the animal welfare act are discretionary, the fact is that Thurrock council is the landlord here. There has been poor management of this site on a number of levels. As we all know, those horses should not be there in the first place. So for Thurrock council to simply shrug shoulders because it is all too tiresome and difficult is really not on.

“Can I ask you to think again about whether Thurrock Council is doing enough to secure the welfare of these animals?

To top it off, the animal welfare campaigners have opened up further debates and questioned whether the council, on a number of counts, are in breach of the £600,000 heritage lottery grant they were given several years ago.