Tuffers is coming to Orsett Hall

FORMER England bowler Phi Tufnell will be the star attraction at a special event at Orsett Hall next month.

A Gentleman’s Evening with Phil Tufnell and Comedian Jed Stone in being held on Friday 7 March. The Orsett Hall Hotel are hosting it along with Orsett Cricket Club.

There will also be an auction on the night where one of the prizes is a holiday – It’s sure to be a good night! 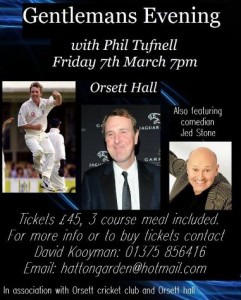