THE LEADER OF Thurrock Council has appealed to Thurrock MP Jackie Doyle-Price to come in and chat, face to face, rather than conduct a war of words on twitter.

Recently, Doyle-Price has said, on social media, that the council should: “Hang its head in shame” over its role in discussions on the Lower Dartford Crossing. She also criticised Labour for raising “Self-indulgent photo opps and posturing to an art form…in Thurrock.”

The attacks intensified at the end of the week as Doyle-Price begun to round on the leader of the council. Ms Doyle-Price stated: “In Jan, John Kent feared that local councils would not survive cuts. Today he can afford to freeze council tax. How can we trust what he says?”

YT understands that soon after Ms Doyle-Price was elected in May 2010, she had monthly meetings with the leader but after less than a year, they were cancelled by the MP.

Cllr Kent said: “I would be more than happy to re-convene the meetings and discuss the issues that concern the people of Thurrock face to face rather than read about them on social media.” 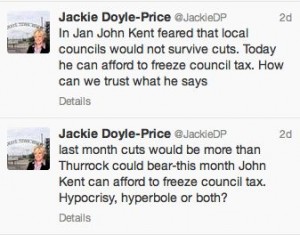