Fabulous Value tonight at The Thameside

COME and see these great One Act plays by Thurrock Courts Players at The Thameside Theatre on the 19th March for an evening of Drama and Comedy.

One play “Raisins ” written by Courts member Dean Rand picked up four nominations at the festival. 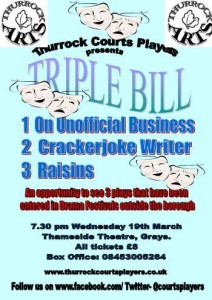