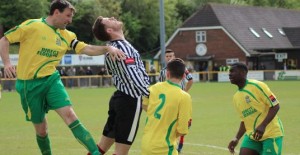 them a play-off semi-final with a well-deserved 2-1 win at Ship Lane. Tilbury were dealt a blow just before kick off when striker Jack West pulled up with an injury and was replaced by Emmanuel Folarin.

In a disappointing first period from both sides, Joe Christou tested home keeper Walker in a good opening spell from the Dockers.

Prolific scorer David Knight was denied by a good James Marrable save on 19 and the same players again on half time with Marrable smothering well.

The second half was an entertaining affair with Tilbury holding possession for long periods. On 49 Ryan Blackman played the ball to Piers Wixon who out of nothing hit a 25-yard rasping effort from the right hand corner of the box past Walker. The goal was reminiscent of his strike at Heybridge Swifts earlier in the season. .

Thurrock continued to press and Knight was again denied by Marrable on 54 with a fine save. On the hour Knight struck the post and with news of Needham Market winning, the game became frantic with Thurrock attacking in numbers. Ibe saw his effort go wide with 20 minutes to go. Knight on 78 had a great chance with only Marrable to beat, but his low shot was saved.

With Needham going 6-1 up, Tilbury inflicted further misery when Cook broke and played the ball across to substitute Danny Aldwinckle, who turned inside the Thurrock box and sent a low shot under Walker’s body putting Tilbury 2-0 up.

With 5 minutes to go Thurrock pulled a goal back from former Tilbury centre half Rob Gilman when he headed home in a congested goalmouth. This saw the game have a frantic finish as the referee added 5 minutes of added time. Tilbury kept possession and should have wrapped the game up with seconds to go when Tilbury went 3 on 1 with Harry Cook unselfishly passing to Emmanuel Folarin who somehow sent the ball wide of an empty net. The full time whistle went immediately to see Tilbury pick up 7 points out of their last 9.

Manager Paul Vaughan gave credit to his side at the final whistle.

The result leaves the Dockers in a 16th place finish.