THIS is one of these wards which one doesn’t pay much attention to as it has been solidly Tory for some time now.

Although Labour candidate, Ella Vine states that people don’t see their councillor, we have to say that there hasn’t been an occasion when we have interviewed him over the last eight years that someone hasn’t hailed him.

We tend to think that Rob is the type of councillor that has embedded himself in the community and will be pretty hard to shift. Yes, there are trends and national issues but a local campaign and long record can help a great deal.

Rob has been the engine room of the Conservative group for a long time now and has a deep and vital feel for the politics of the place. In our interview, we cover a great deal of issues including the Barking and Dagenham issue, which he believes is vital. Whether it is Malvern Road, Southend Road, The Globe Estate, the residents have come to rely on Rob to keep them in the picture and fight their corner.

It gets you wondering whether UKIP could pull off a surprise here? Can UKIP really get over 800 votes here from a zero base? In seats such as Homesteads and Aveley they have laid down roots. But who knows, when it comes to a protest, perhaps many people will turn out to vote at the Europeans and the local council as well.

The Labour candidate, Ella Vine is a breath of fresh air and brings a real enthusiasm to the challenge. She thinks she can win and even if she does not, we do hope she will try again. 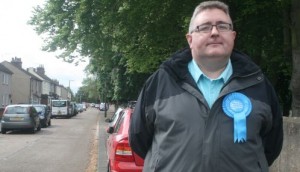