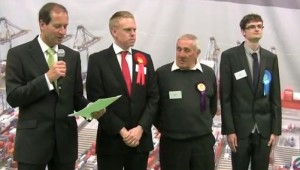 I am writing to thank all the people who voted me to be their Labour councillor. I look forward to having the next four years to serve you, and entire community of Grays Riverside. I am, of course, immensely proud of having won this election; I am also humbled that so many of you placed your trust in me to represent you in Thurrock Council.

I pay tribute to my predecessor, Martin Healy, for all the fantastic work he did during his time as a Labour councillor for Grays Riverside. Along with my good friends, Cllr Kent and Cllr Morris-Cook, I look forward to continuing the good work that the Labour team has put in for many, many years.

It is appropriate, here, that I mention my opponent, Scott Benton. He was very gracious during the whole election process, and has a maturity that belies his age. I have no doubt that we will see him in elected office in the future.

The obvious joy that I am feeling is tempered, somewhat, by the overall results of this election. Firstly, many good and hard-working people – from both my Party and the Conservative Party – either failed to get elected, or lost their bid re-election. My commiserations go those people. However, I am sure that they will bounce back, stronger and more determined. Secondly, I am disappointed that we lost overall control of the Council. I look forward to working with Cllr Kent, Cllr Rice and the rest of my fellow Labour councillors to rectifying this in the future.

In the process of campaigning and winning this election, I am deeply indebted to many good friends, both within and outside the Party, who have helped me. They know who they are, and I will be thanking them privately. The only public thanks I shall give will be to my wife, Natalie. She has supported me through the entire process, and I know that she shall continue to support me through my term of office.

In conclusion, I have been given a great opportunity to serve the people of my Ward and the entire Borough. The next four years will, of course, have its ups and downs. During this time, there is one thing that I will never forget: it is you, the people, who have put me here.