Review: A chorus of approval for A Chorus of Disapproval 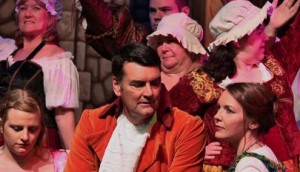 A Chorus of Disapproval by Thurrock Courts Players

THIS Alan Ayckbourn play is tricker than you think. The story follows a young widower, Guy Jones, as he joins an amateur operatic society that is putting on The Beggar’s Opera. He rapidly progresses through the ranks to become the male lead, while simultaneously conducting liaisons with several of the female cast.

Directed by Vic Gray with great discipline and verve, the central part is a tour-de-force by Mike Jones. Mike Jones took quite a gamble because he has taken on quite a role and could have fallen on his face. However, a word perfect Mike, played the part with deft and witty skill, delivering his lines with great timing and humour.

Vic assembled a great cast, who all played memorable roles, no matter how large or small. Wayne Prince shone as Guy Jones and displayed the right amount of sympathy and naivete. One of our favourite characters was Bill Patten whose Mr Huntley-Pike was wonderfully dotty and played very well.

All the men were very strong and showed what great all rounders they are: Colin Gibbins put in his best performance to date with great comic pace (esp the doorbell scene!!); Dean Rands was excellent as was Trevor Povey.

The singing was excellent and the show moved seamlessly from scene to scene. The audience loved it.

This was the first performance since the passing of the much loved John Scowen. We miss him but we know that he may well have watched this from above and said: “You put her in that role?….hhhmmm…”