TWO MALES have been arrested after an incident in Brook Street, Grays.

Police were called to the area at just after 0230 hrs on Monday morning after reports that a commercial property had been broken into.

On arrival, a male claimed that he had been assaulted by another male and that his brother was missing.

The male was taken to Basildon hospital.

The area was searched by the police with the assistance of the police helicopter.

At just after midday, a 17-year-old teenager from Brentwood was traced to the Crammavill Street area of Stifford Clays.

He has been taken to Basildon police station for questioning on suspicion of burglary.

His brother was arrested on suspicion of burglary after he was discharged from Basildon hospital. 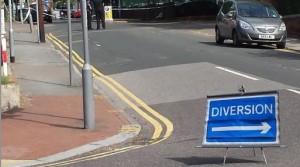 THE ROADS around Grays Police station have been closed off.

Brooke Road and Quarry Hill has been taped off since the early hours of this morning.

Staff at Mecca Bingo are reporting that they are unable to access their premises on Brooke Road.

Mecca Bingo have announced on Twitter that the bingo hall is closed today.