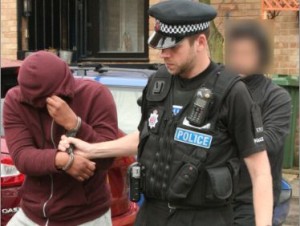 The operation was carried out by detectives, including officers from Essex, who are part of the Eastern Regional Special Operations Unit (ERSOU) a regional team that was formed in March to investigate the rapidly-spreading frauds by thieves posing as police or bank officials.

More than 80 officers from Essex, Hertfordshire, Bedfordshire, Suffolk, Cambridgeshire and the Metropolitan Police Service Police were involved in the searches of six addresses in the Camden area.

Six suspects, four men aged 18, 21 and two aged 22, and two women aged 20 and 21,are currently at a police station in Essex and are being questioned about frauds in Essex and neighbouring counties. A fifth man, aged 23 was also arrested and is currently being quested at a London police station. Numerous phones and computers were seized.

The regional team was formed to investigate hundreds of frauds and attempted frauds being carried out across East Anglia.

Elderly or vulnerable people were being targeted by thieves who posed as police officers or bank staff who told their victims that their bank accounts had been infiltrated by thieves.

The tricksters claimed that as part of their investigations they needed to do forensic tests of the victim’s bank cards and PIN numbers or large amounts of cash to be used for forensic tests.

More than 120 people in Essex have been tricked out of money and the total stolen is more than £400,000.

Detective Inspector Danny Lawrence who leads the ERSOU phone scam taskforce said: “These warrants further show how we are continuing to make the region a hostile place for anyone suspected of being involved in phone scams, which often target elderly and vulnerable people.

“Whilst we are continuing to make arrests, I would remind people to remain aware that phone scams are still operating across the region. As it does tend to be the elderly and vulnerable who are targeted by the offenders, please share the following advice with neighbours and relatives.

“If you are suspicious about a telephone conversation you should end the call and contact police via the non-emergency number, 101. Remember to use a mobile phone or a friend’s phone or wait at least five minutes before calling to ensure you aren’t reconnected to the offender.

“Please also remember that your bank and the police would:

• NEVER ask for your bank account details or PIN number over the phone.

• NEVER ask you to withdraw money and send it to them.

• NEVER ask you to send them your bank cards or any other personal property.”