Detectives are appealing for witnesses after two separate incidents in Grays which resulted in three people being stabbed.

The victims were taken to hospital but their injuries are not life threatening.

The first incident happened shortly before 3.05pm yesterday (Wednesday, November 16) in Clarence Road. Police were called by the ambulance service with reports that two men had been stabbed.

A man, aged in his 40s and from the local area, was taken to hospital in London by the air ambulance. He had suffered serious injuries but these are now not thought to be life threatening. He is still in hospital.

A second man aged in his 20s and also from the local area was taken to a local hospital before paramedics attended. He had a minor stab wound to his leg.

The incident happened close to a multi-storey car park and involved a number of people. Officers have been making a number of enquiries, speaking to witnesses and reviewing CCTV but would like to speak to anyone who has any information about what happened.

The second incident took place shortly after 4.10pm yesterday in the High Street. An 18-year-old man, again from the local area, was pushing his bike along the High Street when he was approached by a man who tried to steal it.

He refused to give it to him and was then stabbed in the lower body. The suspect made off and the victim held onto his bike and made his way home where he collapsed. Ambulance crews were called and he was airlifted to hospital in London. Again his injuries are now not thought to be life threatening but he remains in hospital.

Detectives are keeping an open mind as to whether the two incidents are linked.

DI Phil Moulsher said: “We have taken a number of witnesses’ statements and have been reviewing CCTV. The incidents happened close together within a short time frame. I would urge anyone who has any information about what happened, or who witnessed either incident to contact us as soon as possible.”

People can contact the West CID Team by calling 101 or they can leave information anonymously via independent charity Crimestoppers on 0800 555 111. 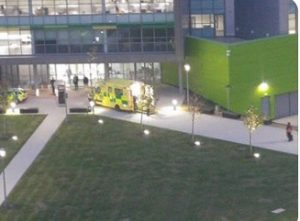 YT understands that a teenager was stabbed in Grays High Street after an incident at South Essex College’s Thurrock campus at just after 4pm.

An 18-year-old was taken to hospital with injuries to his back, arm and legs.

Witnesses or anyone with information are asked to call Grays CID on 101.

They treated a man, believed to be in his 40s, who had serious leg and back injuries.

He was airlifted to the Royal London Hospital for further treatment.

YT has received a report that the air ambulance has landed on Kilverts Field in Grays.

Essex Police and land ambulances are in attendance.