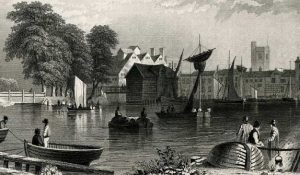 At our November meeting we welcomed back Linda Rhodes, curator of Valence House Museum. She gave us a very detailed illustrated account of the sad lives of some apprentices of the Barking Fishing Fleet. Thousands of children were sent away to serve on fishing smacks, reminiscent of chimney sweeps, Oliver Twist and the like. Barking’s town quay on the River Roding is two miles from the Thames, originally marshland. In the 1830s Hewett‘s Short Blue Fleet reached its peak, smacks travelling as far as Iceland. They mainly caught cod, but also turbot, sole, haddock and whiting – lobster was particularly profitable and some smuggling took place.

Being close to London was an advantage, ice being collected from the Dagenham marshes and stored in ice houses, to keep the fish fresh. In the 1840s a typical fishing boat was a well-smack, fish being kept alive in the well and half salted at sea. This was superseded by the fleeting system when cutters collected frozen boxed fish by rowing boats and fishermen were stuck in the North Sea for months on end. At one time Hewett had 120 vessels manned by 7-8 men, including 4 apprentices. The town quay’s shed and workshops were busy with sail makers, block and tackle makers, fish curers and ships’ biscuit makers. There was a steam mill there, then later a water mill. Many crewmen were lost at sea, as memorials in St Margaret’s church show.

In the 19th century boys and girls were apprenticed for a fixed number of years or until they were 21. There were strict rules – they could not marry and were under their master’s control. They were as young as eight and were orphans or had fallen on hard times. Charities and London parish overseers paid the ship owners a premium of between £3 and £14 and some owners obviously took on boys for the fee alone. Many were badly treated and thrown out after their apprenticeship finished.

The boys coiled ropes, made drinks etc and hauled in 14-16lbs weights used to determine depth, also 4-5 miles of line; it was heavy work and there were several accidents at sea. One lad fell into the ropes and was kicked overboard by his master. He was saved by a bucket lowered over the side. In 1827 an apprentice died of neglect and severe punishment, including lashing with a knotted whip in the bitter cold. The verdict at the inquest was ‘death from exposure’. In 1840 a black boy was cruelly flogged and tied to the windlass, but the verdict was ‘natural death’. One boy bringing tea to the crew in the rain was washed overboard. He could not swim, as this only prolonged drowning. In an 1863 storm 60 Barking men drowned and a further six lives were lost when three fishing smacks were struck by a steamer in 1868. Another apprentice was covered in frostbite and sores which was said to be through eating too much. He was found unconscious but died the next morning. He had congestion of the lungs due to long exposure to cold and should have had better clothing. Even the warm clothing given to the boys at the start of their apprenticeship was taken away. An open verdict was recorded at the inquest.

The fishing fleet has long gone, locating to the East Coast in the 1860s with the coming of the railways, but the quay is still there. It is very sad that most employers wanted to get profitable work from the apprentices at little cost, but this system with no wages, high premiums and no-one to stand up for them was appalling. Nowadays they are key members of the crew, a bright ending to such dreadful times.

Our next meeting is our Christmas party at 8.00pm at the Adult Community College, Richmond Road, Grays on Friday 9 December. Visitors are welcome.