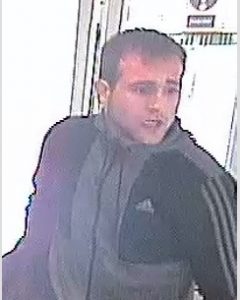 Do you recognise this man?

BRITISH Transport Police would like to speak to him in relation to an assault in which a member of staff was racially abused and assaulted at Tilbury Town railway station.

At around 2.10pm on 9 December, a man approached a member of staff at the ticket barrier and had a verbal altercation about not having the money to pay for a ticket.

A second staff member then approached them to try and diffuse the situation, but the man became loud and aggressive towards him. He threatened him and jumped over the ticket barrier to launch himself at the member of the staff. He then ripped off his high visibility vest and racially abused him.

Investigating officer PC Laura Heath said: “We will not tolerate aggressive behaviour like this towards any person on the rail network, particularly someone who was just trying to do their job and diffuse a tense situation.”