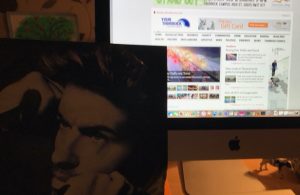 GEORGE’S Girl has been a follower of YT on Twitter for years. She is a very keen George Michael fan. Infact we would say a devout George Michael fan. We found that out when we dared to question him performing his new single at the closing ceremony of the Olympics!

So, with the sad passing of the singer on Christmas Day, we thought we would ask her for her top ten songs and why she was a fan of his work.

George’s Girl saidL “A top ten? That’s really difficult but I have whittled it down – forgive me George

“Why was I such a fan oh his music? Wham! Were vibrant, fresh, young, two very good looking fellas which girls wanted for their boyfriends and fellas were jealous of.

Wham! Rap encapsulated the mood everyone felt at the time and reminded people life was for living. George, himself, had the voice of an angel.If you ever heard him sing live it is my description of liquid honey. He always had time for his fans, knowing how people spent their hard earned cash on his CDs.

“I saw him at many concerts over the years. He didn’t need an army of dancers, he filled up the stage with his presence. I was lucky enough to buy a ticket for The Elizabeth Taylor Aids Foundation concert at The Royal Opera House. This was on my birthday and I ran to the stage near the end of the set with a banner and he wished me happy birthday twice. I was walking on air..

“He raised many thousands of pounds that night to a very worthy cause. As news of his charitable gifts are coming out now I heard this throughout the years and told people how benevolent he was but I don’t think they believed me – they will now.

I’m off up to his London home (Tuesday) to pay my respects. The least I can do for a man whose songs have walked side by side with me since my early teenage years.

“God bless George Michael and may he find the peace he searched for over the years.