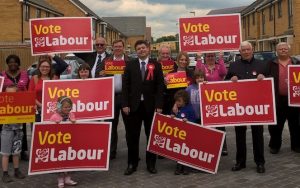 NEW evidence reveals that over the past year the NHS organisation charged with looking after Thurrock people’s health has failed to hit a range of its targets – from referral to treatment to waits for cancer treatment.

Reports to April’s board meeting of the Thurrock Clinical Commissioning Group (CCG) laid bare the organisation’s failure to deliver for Thurrock.

John Kent, Thurrock’s Labour parliamentary candidate said “To make this failure even worse, our Tory MP and our Tory council, who should be overseeing the CCG’s performance, have said nothing on the subject.

“According to the NHS, ‘the maximum waiting time for non-urgent consultant-led treatments is 18 weeks.’ But the latest figures show nearly 15 per cent of Thurrock people failed to get treatment within this time frame.

“Like the Tory council refusing to admit a ‘crisis’ in the NHS, the CCG claim this ‘continues to be a challenge’. But it’s more than a challenge – it’s a disgrace that people in Thurrock are being treated so poorly.”

Mr Kent continued “This is far from the only target missed. For example, 85 per cent of patients should be ‘beginning first definitive treatment following urgent GP referral’. In Thurrock the actual figure in December was 67.1 per cent. This is simply not good enough!

“It seems that to the Tories, these are just percentages on a spreadsheet, but we must remember these are real people who aren’t getting the health care they need and deserve.

“I am seeking an urgent meeting with the council’s Director of Public Health to demand real action instead of delay and excuses.”

One Response to "GE17: Labour’s John Kent “disgraceful” performance of NHS in Thurrock"