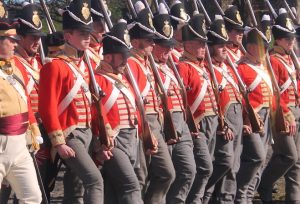 The History of Tilbury Fort by Kevin Diver

For our last lecture of the season local historian Kevin Diver gave us a detailed and interesting illustrated history of Tilbury Fort.

Henry VIII’s Tudor Block House at Tilbury was built c1539 – one of five erected at the mouth of the Thames to provide protection from invaders from the continent. It was built of brick and stone, with only nine men in the garrison. When Philip I’s Spanish Armada threatened more fortifications were needed and a five star earth works and ramparts were constructed; the fort was re-armed when Queen Elizabeth I took the throne. The soldiers were not paid and damage and looting took place.

In the Civil War the fort was held by parliament; it became a check point for passing vessels to show their loyalty to the king; there were now 69 soldiers in total. In 1660 Charles II ordered a review of the defences. The following year his chief engineer Bernard de Gomme designed a new fort. The existing fort had not been well maintained and many soldiers deserted. At that time there was no sea wall and the ferry crossing to Gravesend was from the fort.

The new Tilbury Fort was built in the 1680s, keeping the Tudor blockhouse. Its main defence was long gun lines at river level. It had 75 heavy cannon to deliver broadsides to vessels coming up the river. However, the fifth bastion of the star design was never built. Chief Engineer Sir Martin Beckman followed de Gomme to complete the fort. He had helped in the capture of Captain Blood who tried to steal the crown jewels from the Tower of London, where Beckman was living.

Tilbury had been considered as an arsenal, but instead Woolwich was chosen. The Board of Ordnance increased gun power at the fort and 19,000 barrels of gunpowder were stored there. There were two moats, inner and outer with four bastions, angled to see a wide vision of fire. Creeks surrounded the fort and sluice gates operated on the very marshy ground; the area could be flooded to make landing cannon impossible, a very secure defence. Earthworks surrounded the fort and it was very well fortified. The river was closer to the fort than now and the main entrance was from the rear via a land bridge and drawbridges, from what is now Fort Road.

At the front entrance the water gate was designed to impress, with the Stuart coat of arms above the door. The gunpowder magazines had a blast wall outside, with decorated brickwork. The doors were copper lined and wooden dowels instead of nails were used on the floor to prevent any sparks. Following the 1745 Battle of Culloden 300 Scottish Jacobites were held in very poor prison conditions in the gunpowder magazines. 45 died and many were transported to Barbados. A memorial to them was placed outside the Fort, known as the Culloden stone.

In 1780 a mock attack was staged, watched by hundreds of spectators. The fort was regarrisoned 1797 and by the 1850s we were in an arms race with the rest of Europe – the French had iron ships with faster guns. In 1859 there was a Royal Commission to review defences and Coalhouse Fort was added. Tilbury Fort became a second line of defence. In 1868 General Gordon oversaw the remodelling of Tilbury Fort, with earth embankments on the front walls and 13 new rifles. Conditions were improved for the soldiers, with running water and toilets, a kitchen, chapel, schoolhouse and married quarters. Soldiers planted allotments and gardens in their spare time. However, the guns were too slow, being replaced by quick firing guns in 1901. These had been removed by 1906. The river was so well defended that Tilbury really became redundant.

In 1914 the fort was used by soldiers who left for France. The RAOC took over and ammunition was stored there. There were 75 men and anti-aircraft equipment was installed. The outer defences were abandoned, with no access from the rear and a pontoon bridge was erected across to Gravesend. At the end of WW1 the fort received redundant horses, which were sold off. By the 1920s the fort was obsolete.

In WW2 Tilbury Fort was bomb damaged. The Home Guard ran operations from the guard house and chapel. They had two spigot mortars and other guns, with trenches criss-crossing the ground to prevent gliders landing. Most of the internal buildings were demolished. The fort was handed over to the Ministry of Works in 1950 and is now managed by English Heritage. Tilbury Fort is well worth a visit in the summer holidays.

Our next meeting will be in September – date and time to be advised. For further information see our website www.thurrock-history.org.uk.