Surfs Up as Baywatch comes to Vue Thurrock 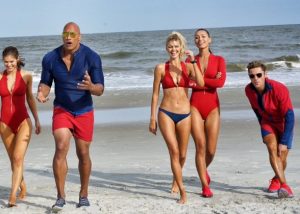 BRITS who can’t make it to the coast this Bank Holiday can instead transport themselves to sunnier climes at Vue Thurrock. To celebrate the launch of Baywatch, footage captured from California’s Venice Beach will be screened in stunning 4K definition with 5.1 surround sound before all screenings on Monday 29 May.

With the bank holiday forecast to bring more rain than shine, Vue Thurrock customers can sit back, relax and enjoy a healthy dose of (virtual) sunlight thanks to the ‘beach immersion’ sessions which will capture golden sands and waves lapping against the shore.

The psychological benefits of a beach break are widely known to help relax the mind and focus the senses and just a few minutes of this type of meditative experience can help keep viewers feeling relaxed and calm for the rest of the day.

Jo Hemmings, Behavioural Psychologist says, “While we know that relaxing on a beach holiday helps us both unwind and recharge our batteries, studies have shown that the psychological effects have a genuine impact on our emotional wellbeing. The link between water and mental health – known as ‘blue space’ allows us to de-stress by both releasing the feel-good hormone serotonin and allowing the light and sound from a beach to soothe and calm us.

By creating a virtual beach situation, especially associated with a TV series that we are already familiar with and love, Vue has replicated both those feelings of nostalgia from past holidays as well as enhancing the anticipation of holidays to come”.

Dean Cross, Film Content Manager at Vue Entertainment says, “At Vue we’re always looking to give our customers the very best big screen experiences and make going to the cinema a chance to switch off from everyday life. By taking them directly to California – albeit via Thurrock – before screenings of Baywatch, we’re offering the ultimate opportunity to relax and unwind”.