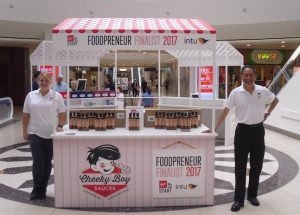 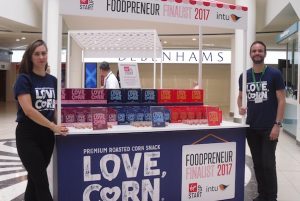 TWO of the country’s up-and-coming food and drink entrepreneurs have opened pop-up shops at intu Lakeside this week as they take part in a start-ups competition being run by owner intu and Virgin StartUp.

Kaye Foong and Jamie McCloskey are semi-finalists of Foodpreneur 2017, launched by intu and Virgin StartUp to shine a light on the country’s most creative and innovative food and drink start-ups. They are running the week-long pop-up shops until Friday (7 July) in order to compete for six weeks of free space with intu and online at intu.co.uk and need to get thousands of intu Lakeside shoppers excited about their products to stand a chance at winning the top prize.

Shoppers will get the chance to enjoy premium-roasted corn which is being sold by Jamie’s business Love Corn and there will also be sauces, dips and marinades from Kaye’s business Cheeky Boy Sauces.

The entrepreneurs will be judged on everything from customer engagement to their social media presence as they attempt to promote their products to intu Lakeside shoppers for the first time. If successful, they will be invited to pitch their business to a number of industry experts including Dragons’ Den star Levi Roots in the final stage of the competition.

Marc Myers, general manager at intu Lakeside, said: “As part of our mission to create new experiences for customers that make them smile, we’re excited that customers of intu Lakeside will be among the first in the country to enjoy these fantastic new drink and businesses. We think they’re going to be fantastic new additions to the centre’s strong line-up of retail and leisure brands.

“At the same time we’re looking forward to helping these entrepreneurs flourish with the opportunity to reach thousands of new customers in our centre and benefit from all the support on offer from intu and Virgin StartUp.”

Kaye said: “I travelled for years in the British Army and have been lucky enough to visit countries all over the world. The food we had on operations was pretty awful but everybody I knew had a bottle of hot sauce with them. So when I was travelling, I wanted to try the real food from roadside diners and street food vendors. I followed how people cooked their food in different regions and the different spices that they used.

“This eventually inspired me to produce my own all-natural sources at my home in West Sussex which I’m thrilled to now be selling at intu Lakeside for a week. They’re delicious and I love the idea that they could also go into the British army ration pack one day!”

“Love Corn is massively on trend when it comes to healthy snacking. It’s high in fibre, vegan and gluten free, low in fat and sugar free. But most importantly it’s crunchy and tastes delicious.”

Jamie and Kaye are among eight Foodpreneur semi-finalists opening pop-up shops at intu shopping centres across the country.

Mei Shui, managing director of Virgin StartUp said: “Entrepreneurship is the lifeblood of the UK economy and we’re proud to be shining a light on the UK food and drink start-up scene with these eight entrepreneurs. We’re excited to give them the opportunity to prove how popular their ideas are through running their own pop-up store in intu centres. Hopefully customers seeing these eight entrepreneurs selling their products will realise it’s possible to turn their business ideas into reality and that all of these start-ups will continue to flourish and push the UK start-up scene forward.”