A charity motorbike run from the Top House pub in Aveley helped raise much needed funs for the air ambulance. 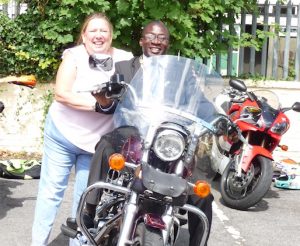 The run went all the way to Holly’s Diner in Latchingdon where participants paid £5 to take part.

The motorbike run was set on it’s way by the Mayor of Thurrock, cllr Tunde Ojetola.

The Mayor of Thurrock entered into the spirit of the day by sitting on Harley Davison (Photo attached).

They had a sponsored BBQ where the food was donated by the Manager of the Aveley Co-Op store.

They had a number of other games “pick a number”, “Pick a Box” and a “Killer Pool” competition.

It was a great day and fun was add by all.

They managed to raise a grand total of £1,255.16 in aid of The Essex and Herts Air Ambulance.