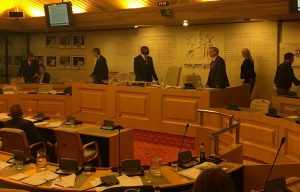 THE Leader of the Thurrock Labour Group has slammed September’s meeting of Thurrock Council as being a “total shambles”.

Councillor Oliver Gerrish said “I feel very bad for residents that had to sit through this mess. It was possibly the worst, most embarrassing meeting I have ever seen in Thurrock. At times I was ashamed to even be in the same room because of the poor behaviour of Tory councillors in particular. No one should behave in that way, but councillors should have a special appreciation of their role, as community leaders, to uphold the dignity of council.

“We’ve heard foul language thrown across the chamber, the meeting constantly disrupted and even suspended for a period of time. There are a number of Tory councillors that should be ashamed of themselves.

“Frankly, the whole evening showed horrendous contempt to the residents of Thurrock, culminating in a statement that it would be better if local residents protesting against the grass tax were ‘replaced with horses’ from a member of the Conservative Group. Such comments show a huge lack of respect for our residents and sadly this is all too evident in the approach of the ruling group on the council.

“This must be sorted out – Thurrock Tories need to learn that part of leadership is listening. They should listen to what residents and councillors from other parties are telling them about some of the policies that they are trying to force through, such as the ‘grass tax’. They should stop treating residents as just an inconvenient roadblock to their plans. There needs to be a full apology from the Conservative Group for their behaviour throughout the evening.”