Police received reports of a disturbance in Station Road, Tilbury, at around 11.30am today (Thursday, October 19).

Officers received calls that man had been threatened by two men in possession of a knife who may have boarded a train.

Police armed with a Taser attended both Tilbury and South Ockendon train stations and arrested the men who remain in custody for questioning. 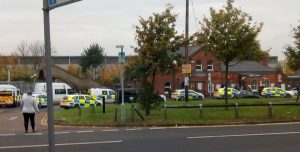 YT has received a report of an incident close to Ockendon railway station.

Reports of a number of police vehicles in attendance.